There was a time when there were only a couple of types of bullets from which to choose. However, over time, the ammunition industry evolved to manufacture a plethora of types and sizes of bullets. To know what bullet sizes to use, you need to become more familiar with a few things first.

The word bullet is often used incorrectly. What you may think of as a bullet is actually a combination of different parts. The case is the outside, cylindrical part. The pointed end is the bullet. This is what will hit your target when you shoot. Inside the case are the gunpowder and the primer. The primer causes the ignition which allows the gunpowder to ignite and pop the bullet out of the case to shoot. The whole thing is called a cartridge, not a bullet.

Caliber is the size of the inside of your gun barrel. You have to choose bullets that match the caliber or else you will have big problems. The bullet needs to sail smoothly out of the barrel. If it is too small, there is a risk that it won’t move correctly out of the barrel. With a too large caliber, you run the risk of having your gun blow up due to the bullet getting stuck.

A few more things to know before you start considering the different types of bullets include how the weight and speed are determined and what stopping power means. The weight of the cartridge is measured in grains. One pound is equivalent to 7,000 grains. The exact speed of the bullet is given in feet per second. The stopping power of the bullet is the number of bullets it would take to hit the target and drop it.

Knowing these terms and understanding the general design of a bullet will help you as you consider your options and allow you to make a better decision. 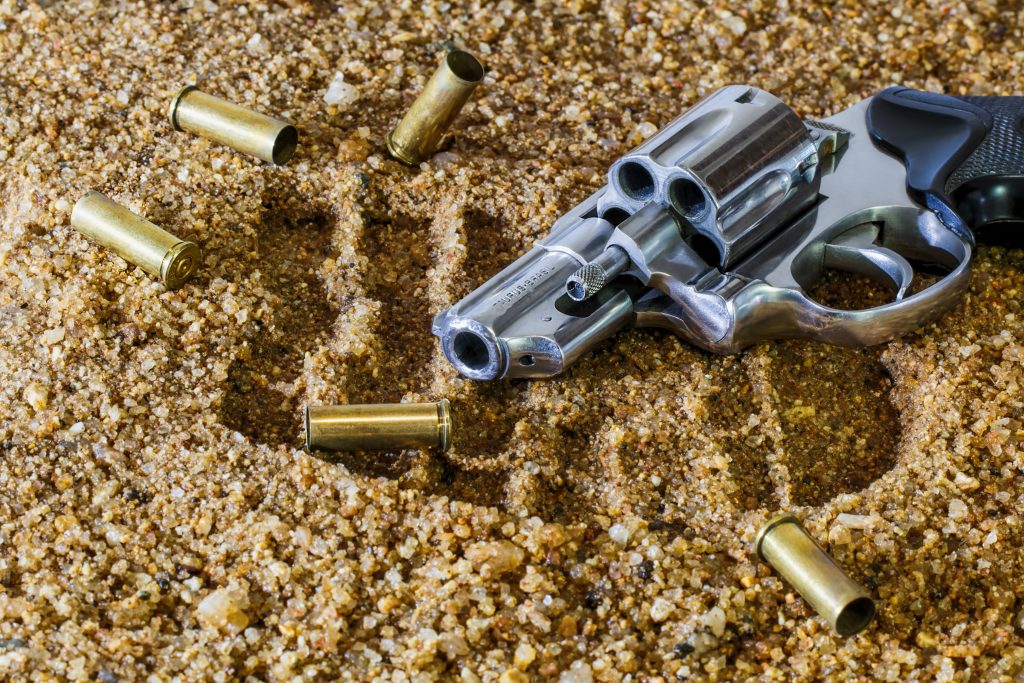 While there are a number of bullet types available in the market, we’ll go over the ones that are the most commonly used in hunting, self-defense, and target practice.

Considered among the more dangerous options, hollow point bullets are structured to expand on collision with the target. They are mostly used for home defense and by the armed forces and law enforcement due to their intense stopping power. While considered dangerous, they are the best in case of an attack since their high stopping power ensures maximum damage with every subsequent bullet and restricts the attacker.

Full metal jacket, or FMJ as they are called, are the most common type of bullets, mainly used in shooting ranges with short distances. The bullet is made of a soft metal, such as lead, which is covered by hard metal, such as copper. The presence of an outer metal covering ensures that the lead is not left in the barrel after firing the bullet. These bullets come in all kinds of shapes, including pointy, round, and flat. FMJ bullets are not very suitable for self-defense or attacks due to the low stopping power. They cut small channels as they go through the target.

OTMs have a very small opening on the top, which makes them quite similar to hollow point bullets; however, they can’t expand due to the opening. This type of bullet is preferred mainly by long-distance target shooters since they are manufactured in a way that the bullets are standardized when it comes to their roundness. The consistency enables their suitability for shooting long-range targets.

Ballistic tip is the combination of full metal jacket and hollow point bullet types. It takes the stopping power of the hollow point and the physical structure of FMJ to create a bullet that is long with a boat-tail base and has a plastic covering. Ballistic tip bullets are pointy with consistent and sleek bottoms. The tip is made of plastic which enables it to keep the shape intact. These types of bullets are mainly used in hunting due to the high stopping power. The weight is mostly collected in the back of the bullet to give it more speed.

Designed to expand on hitting the target, soft point bullets are made of a soft metal, such as lead, at their core and have a covering of a strong, hard metal. The front tip is left open with some of the lead exposed so that the soft metal can easily expand on hitting the target. Therefore, soft point bullets are quite similar to the full metal jacket bullets. They can cause some serious wounds due to expanding from the original caliber size. They are available in both boat-tails and normal cylindrical ends.

As the name suggests, these are small cartridges used for hunting birds, primarily. These are available as shotgun rounds and come in multiple quantities, more than a dozen, in one cartridge. They spray out when shot. Bird shots are used only as shotgun rounds and for shooting birds and pigeons but never for attack or self-defense.

It’s quite natural for a novice to get confused when it comes to buying ammunition. There are so many sizes of bullets available on the market today that it can be tough to select the one that fits best with your needs. The most common use is hunting, self-defense, or targeting shooting, so we’ll cover the bullet sizes that mostly cater to these objectives.

Do keep in mind that apart from the ones listed here, there are many other bullet sizes you’ll find when you go for ammunition shopping. Other common options include .380ACP, .45ACP, and 12 gauge. There are some less popular ones as well, such as .357 Magnum, which is used in revolvers and more expensive than the rest, priced at about $0.80 each. With that in mind, though, let’s look at the top options. 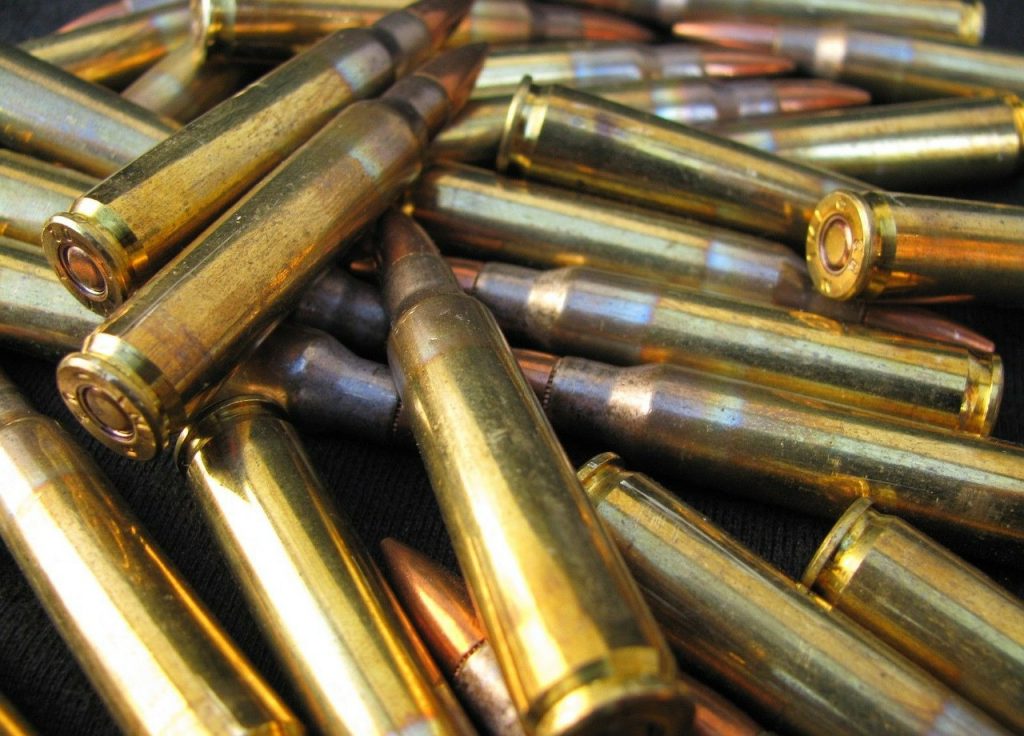 The .22LR is the most commonly sold bullet due to a variety of factors. The .22 long rifle is the starter caliber for shooters. It’s used to hunt snakes, birds, etc. Here are some specific features of the bullet:

The .22LR is the best option for beginners due to its cheap price and minimum hassles of handling. While it is meant for shooting birds, snakes, and targets, it can cause serious wounds if shot at a human since it keeps moving inside the body and damages the internal organs.

.25 ACP, the automatic Colt pistol, is an upgraded version of .22LR. Being a little larger, it has a slightly higher stopping power. It’s a centerfire caliber and considered more reliable due to the centerfire covering. Let’s see some of the features of .25ACP:

The .25ACP is meant to be used in handguns for home security since they can cause more damage due to higher stopping power and the reliable centerfire design.

The 9mm Luger, or the 9x19mm Parabellum, as it’s technically named, is basically an all-rounder bullet that can be used in self-defense as well as for recreational shooting. The shooting power depends on the type of gun used. However, they do have a very low recoil which makes them more popular.

Here’s what you get when you purchase the 9mm Luger:

The 9mm Luger can also be used in concealed guns. The size makes it very versatile.

Also called as the .223, the .56x45mm is used both by the armed forces as well as by civilians. The caliber is good to use for long-range, which makes it popular as a home defense round among civilians.

Priced at about $0.30 each, the .223 caliber is not very popular since you can’t use it for hunting, but nevertheless, it packs power and is widely used in self-defense.

Manufactured for the FBI initially as a 10mm caliber, the .40 S&W has been heavily popular with defense and law enforcement agencies. It has more stopping power than other handgun cartridges used and also costs less.

Here’s what you should know about .40 S&W before choosing to buy it:

While the FBI has shifted back to use the 9mm cartridge mostly, the .40 S&W is more suitable and is still used by many law enforcement agencies due to more power and energy.

Wrap Up of Bullet Sizes

More options mean more confusion. This is often the case when it comes to bullet sizes. It can be overwhelming to buy the right caliber considering there are myriad sizes available in the market. Wrong bullet size and type with respect to the gun you possess can severely backfire, literally.

There are a lot of factors that need to be considered before purchasing the bullet, along with understanding a lot of technical terms. What we have covered should give you a solid start as you begin to explore your ammunition options.